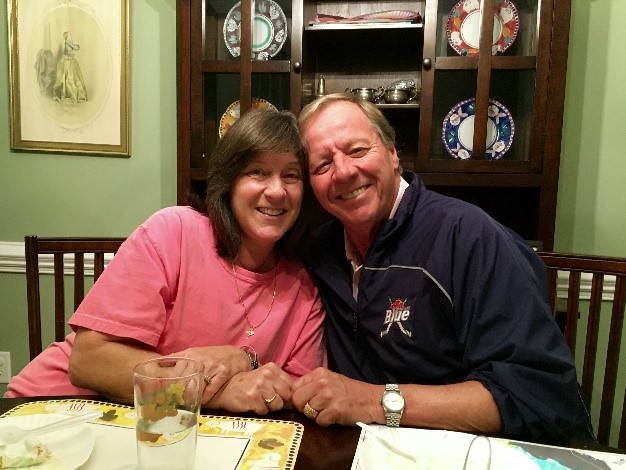 On May 8, 2014 upon completion of four cycles of adjuvant chemotherapy with Cisplatin/Alimta I received the verdict:  I WAS IN REMISSION.  My original diagnosis was stage II adenocarcinoma of the lung.  It was my upper left lobe.  I had surgery to remove the tumor in December of 2013.  I had 10 weeks of recuperation and began chemotherapy in February 2014.  I lost a lot of my hair.  I was unable to eat due to feeling nauseous so often.   I spent several days after a treatment in bed unable to conduct a normal day of activity.  I was weak and unable to concentrate a lot of the time.  I love the sun but my eyes became so sensitive to the light that I couldn’t enjoy it.

After 2 ½ years of being cancer free at a routine follow up visit on July 20, 2016 the finding was:  RELAPSED adenocarcinoma of the same lung.  My heart was broken.  I was so fearful of having to do chemotherapy once again.  Bingo……much to my
surprise during my time off, a new therapy had surfaced.  I was ready to yell praises from a mountain top.  Having relapsed was not as threatening since I was to begin immunotherapy instead of chemotherapy.  Treatment began July 22, 2016 and continued every two weeks with completion of my 6th infusion of Nivolumab on October 7, 2016.  The plan was to complete six infusions and then be tested to see what progress was made.

October 21, 2016 the miracle was confirmed.  All of the fluid was gone and  my lung was perfectly clear.  THE CANCER WAS GONE.  I have had a dramatic response to the treatments.  I can only say that I am the lucky one.  A quick and surprising diagnosis for the second time and an even quicker recovery with this new discovery.  Infusions were an hour long.  Side effects were a walk in the park.  I continued life as usual.  I experienced some fatigue.  I had episodes of nausea every here and there in the beginning.  I had some joint aches. I didn’t lose any hair.  I frequently forgot that I was fighting to survive.  Needless to say I wasn’t sure of how it was possible to feel so good during treatment.  How could I be getting better?

I am no longer afraid of my nemesis “Lung Cancer”.  Praises and great hope come along with the incredible and unbelievable treatment known as IMMUNOTHERAPY.