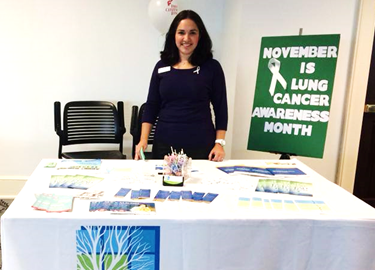 Myths and misconceptions surround lung cancer. In particular, the myth that only smokers get lung cancer leaves the public at risk for ignoring the early signs of lung cancer. Late diagnosis of lung cancer is linked to lower survival rate. I know this from personal experience.
In 2003, my father was diagnosed with stage 4 lung cancer. Our family was shocked by the diagnosis because we did not think lung cancer would ever or could ever happen to our healthy non-smoking father. In addition to us not expecting this diagnosis, his physician did not look for lung cancer as a source of his symptoms. Although my father experienced a prolonged cough for months, his lung cancer was not diagnosed until it had metastasized to his brain and he showed neurological symptoms.
His physician did not look for lung cancer because my father was a non-smoker. His cough was treated in many other ways. We did not know to question whether lung cancer should be investigated because we too were unaware of this possibility.  It is 11 years later but this issue still occurs and correct diagnoses can be delayed in non-smokers. These delays can be deadly. Lung cancer patients diagnosed at stage 4 currently have a 5-year survival rate of only 1%.
I volunteer with the Lung Cancer Initiative of North Carolina in the role of Programs Chair. I work with our Education Program to dispel myths and to educate both the general public and the medical community. I do this in memory of my father.
Everyone has lungs and everyone can get lung cancer. 1 in 5 people with lung cancer never smoked. Take care of yourself by knowing the early symptoms of lung cancer.
For a list of lung cancer symptoms, view our fact sheet.
For a list of lung cancer myths, view our bookmark
And, of course, join the Raleigh LUNGe Forward 5K on November 1st or the Greensboro LUNGe Foward 5K on November 8.  My team, Ray of Hope, will be in Raleigh, spreading awareness and raising funds for lung cancer research.  And we'd love it if you'd join us.
Melissa Tanner, MBA
LCINC Programs Chair
Category Tag(s): What's Trending? The LCI Blog