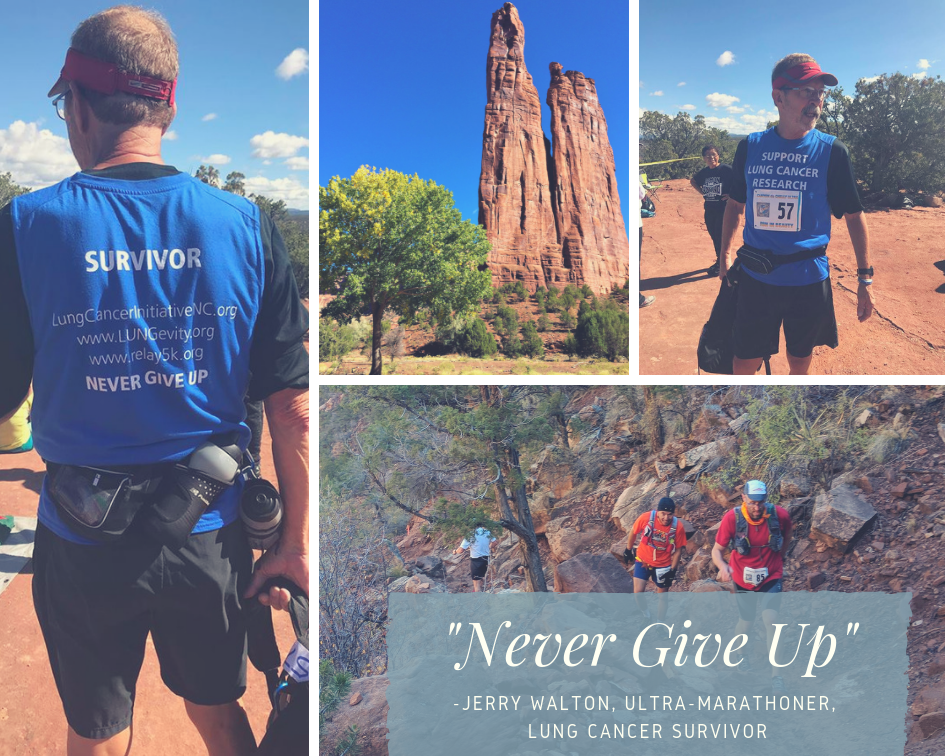 It took 9 hours, 36 minutes and 19 seconds for Raleigh native Jerry Walton to traverse sand, water crossings and a daring climb up and down a canyon to complete the 55K (34.2 mile) 2018 Canyon de Chelly Ultra-Marathon in Chinle, Arizona.  While this annual ultra-marathon is a once in a lifetime experience for those who are able to complete it, Jerry was more than up for the challenge.  Diagnosed with lung cancer more than twelve years ago at only 52 years of age, Jerry has already faced both the physical and emotional toll of this disease.

During this year’s race, as he does for all of his races, Jerry proudly wore a running shirt that said “Never Give Up” across the back. “I’m happy I was able to complete the race, that my commitment to the training and preparation paid off and that I never gave up,” said Jerry. “When I crossed the finish line, after 9-and-a-half hours of running, I really felt like I just wanted to keep running forever.”

Jerry was diagnosed with lung cancer in 2006 after he requested a chest x-ray during a routine physical. “Those are some scary words to hear from your doctor – you have lung cancer – particularly when you had no symptoms,” Jerry said.

On March 1, 2006, he had surgery to remove the upper lobe of his left lung and then completed four rounds of chemotherapy from May through July.

Jerry started off by just walking to the mailbox and back.  “I did my first ¼ mile run on a treadmill in September 2006,” he said.  “I haven’t quit running since then.”

Jerry was one of only 150 runners chosen by lottery out of more than 600 entries to participate in this year’s event through the heart of the Navajo reservation. The annual event is the only time non-natives can be alone in the Canyon without a Navaho guide and consists of running 17 miles up Canyon de Chelly and a run up Bat Canyon trail, 1,200 feet high from the canyon floor to the summit and back.

“I started training in March of this year,” said Jerry.  “I had no time goal for the race, only to finish it within the allotted time (approximately eleven hours).  The longest distance I ran in training was 26.7 miles, and my highest monthly total was 192 miles.”

In an effort to prepare for Arizona’s elevation of more than 5,500 feet, Jerry traveled to Boone, NC the week before the event and ran and hiked some of the higher mountain trails.  “I think it helped, if not physically then mentally, in my preparation,” he said.

Jerry always encourages individuals to say “hi” to him on the street whenever they see him running, and he is committed to continuing his encouragement for people to “Never Give Up.”

“When I was diagnosed twelve years ago,” Jerry said, “there were only three options to treat lung cancer, at best:  surgery, chemo and radiation.  Today they treat some lung cancers with a pill!  New treatments and therapies are being explored every day.  We have a long way to go, but we have also come a long way.”

“Never Give Up also applies to survivorship,” he added.  “It may take a little time, but we can find and establish a ‘new normal’ with a greater appreciation for life around us.”

“I’m proof that lung cancer doesn’t have to be a death sentence,” Jerry said.  “With earlier detection and proper treatment, survivors can lead a new normal life – and even run an ultra-marathon!”

Jerry has been a lung cancer advocate and volunteer of the Lung Cancer Initiative for more than five years.  He participates in health fairs and other events where he is able to share his story and raise awareness for lung cancer.