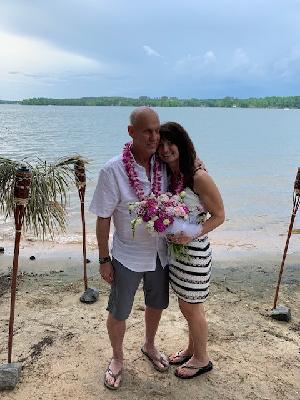 Lives change forever when your doctor tells you or someone you love "you have Stage 4 Lung Cancer." The physical, mental and emotional battle begins, but sometimes even the strongest and bravest cancer warriors can't beat such an insidious disease. During Kelly's 9.5 month Lung Cancer battle, we went to the ER 11 times, underwent 3 thoracentesis, surgically removed the lining of Kelly's lung, braved 13 rounds of chemo/immunotherapy, was revived by chest compressions after a code blue anaphylactic reaction to round 6 chemo, fought 101-103 degree fever/chills/night sweats for 4 months, endured severe mouth sores for 3 months, called Paramedics and took an ambulance ride when blood pressure dropped critically low after starting new chemo, and was admitted 4 times to the hospital for stays of 5-8 days, undergoing countless biopsies, scans, and blood transfusions/lab draws. All of this happened to a man who despised needles.

And yet, to have seen Kelly - you would never have had any idea exactly what all he was going through. Kelly continued to give hitting lessons up until a month before he passed away, went for long walks on the beach, went to travel and high school baseball games, grilled out, took dogs for walks, and got married. In Feb, when we were told that the cancer had spread to his liver, neck, spine, hip and sternum, he told me, “We’re not done. We’re not giving up. We’re not giving in. They can tell me it’s spread to 95% of my body, but you know what that means? I have 5% of my body to fight with.” #KellyStrong - those who knew Kelly know the grit behind the man and those words.