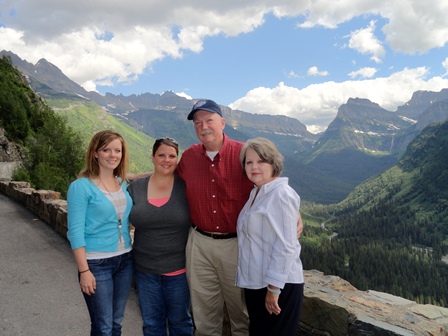 My dad was not, and never had been, a smoker; he didn't work with dangerous chemicals or aspirate toxic substances. So how could he be telling me he had Stage IV lung cancer? This was my mindset when I first learned of his diagnosis with non-small cell adenocarcinoma in April 2010.

Before that time I, like many people, assumed that lung cancer was a smoker's disease and that my decision to not smoke or subject myself to dangerous inhalants absolved me and others like me from risk. This misconception is a common one. In fact, for months my dad had been fighting a chronic respiratory infection, but when the diagnosis was finally made his primary doctor was shocked and aggrieved that he had not spotted it sooner.

Barron Douglas Goodson was an extraordinary person. A kind, strong, upright, and dry-witted man who spoke only when there was a good story to tell, an important point to make or an assuring word to share. He was all about faith, family, friends, and H.O.P.E. (Having Optimism Present Every day). He was one of the most beloved people I ever knew, who received hundreds and hundreds of get-well cards and messages during his illness. He was the backbone of our family and though he is readily present in spirit, his physical absence from our lives is palpable. I wonder: If more attention had been given to lung cancer in the last few decades, might he still be here?
Lung cancer is the number one cancer killer with over 20-30,000 new cases of non-smokers’ lung cancer each year in the U.S. alone; yet, it receives a fraction of the funding or publicity due to the stigma that sufferers must have brought it on themselves. The unspoken follow-on assumption is that, "I don't smoke, so I have no reason to invest in the prevention or treatment of lung cancer." In truth, those of us impacted by this disease know that if you have lungs, you can get lung cancer. The five-year survival rate is a mere 16%. This is not an isolated concern; it impacts us all. But there is hope; major advances in lung cancer screening, national initiatives and research into genetic mutations and new, improved treatments are emerging as we speak. These efforts need our collective support to gain momentum and ensure that lung cancer doesn't get the last word.
My mom, my sister, and I, or “Barron's Girls” for short, and other members of our family decided soon after Dad passed in January 2012 to pick up the mantle in hopes that we could help spare others from our ordeal. In August of that year and with the invaluable aid of friends and family, we held the first annual Barron D. Goodson Memorial Classic Car & Truck Show, where we harnessed my dad's love of classic cars to raise over $13,000 for the North Carolina Lung Cancer Partnership. In October 2013, our second show brought the grand total up to $30,000 for the newly-styled Lung Cancer Initiative of North Carolina, a truly wonderful organization that we have the privilege of working alongside. The LCINC know lung cancer on a personal basis, like us and so many others.
This year, in remembrance of Barron's 65th birthday on August 13th, we are aiming to raise a further $6,500 for the LCINC. We have some terrific events lined up to help us do just that, including a Dining for Dollars night at LongHorn Steakhouse in Concord, half-price ticket vouchers for the Kannapolis Intimidators baseball game on August 28th, and some truly fantastic raffle prizes for online and in-person donations. We'll also have information tables set up at the mini cruise-in being held next door to LongHorn on our fundraiser night, and at Gary's BBQ in China Grove and Darrell's BBQ in Rockwell over the next few weeks. You can get all the details on how you can get involved on our website. In fact, we've already reached 12% of our goal, so get your engines revved for remembering Barron's 65th birthday the right way!
Together, we are helping to decrease deaths, raise awareness, garner research funding and improve care and support for lung cancer patients and their families, right here in North Carolina. As Dad would say, “many thanks” for ending the stigma, and for increasing H.O.P.E. It's what he would do, too.
--Sunni Goodson
Learn more about the Barron D. Goodson 65th Birthday Celebration & Fundraiser
More Stories of Hope & Action