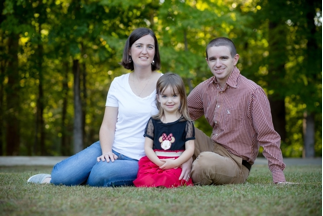 In September of 2014, I was a young mother of a 1 year old little girl. I went in for a routine eye exam and the eye doctor discovered a spot on my eye she wanted me to have checked out. The next day she sent me to a retina specialist who told me the spot was a tumor. He sent me to an ocular oncologist who ordered a chest CT scan, a mammogram, a brain MRI, and a PET scan. The scans showed a tumor in my lower left lung and lymph nodes in my lungs along with a couple spots on my bones that lit up on the PET scan. On Christmas Eve, I got the phone call saying I needed surgery to remove the tumor in my lung. The surgery confirmed my biggest fear: cancer. How could I have stage IV lung cancer? I was 31 years old, I was a member of my college track team, and I had NEVER smoked anything; never even tried anything.

I was referred to the best oncologist in the area for lung cancer. She was just as shocked as I was that I had lung cancer. She KNEW I must have a gene mutation that was driving my cancer. The only question was, which mutation? She ordered tests on my tumor for the most common mutations, they all came back negative.  While we were waiting for further test results, we decided to start chemo to start fighting the cancer. I went through 3 rounds, during which time I lost all of my hair. I continued my full time career of a high school math teacher and also continued to coach our varsity track team. My doctor ordered the next test, which showed some high levels, promising for a mutation. After one more test, it was finally confirmed, I had a mutation: the ROS1 gene mutation, a first for my oncologist. Fortunately ROS1 has a targeted treatment which allowed me to just take one pill twice a day to keep my cancer away. I was able to stay on the first medication from March 2015 to March 2017. It was great, I didn’t really have any side effects, and most importantly I felt healthy! The only draw back was, I had been told the medication would definitely fail at some point but we didn't know when. It is hard living with that fear and not knowing what's next.

On Valentine’s Day 2017, my brain MRI showed more than a dozen small tumors. (In a cruel twist of fate, my cousin, another athletic non-smoker, was diagnosed at age 44 with lung cancer around that same time. She has a different gene mutation than I do and is currently doing well with her treatment options). The best option for me was to switch medications and the one I needed was only available through a clinical trial... in Boston Massachusetts. So currently my new normal is taking a day off from teaching and hopping on a flight to Boston at 5:30 in the morning. I spend several hours meeting with my oncologist in Boston and clinical trial team, and then I catch a flight back home so I can see my little girl before she goes to bed.

My hope is that science and research will stay one or two steps ahead of me so I have something new to try when this round of treatment fails and that one day a cure will be found.