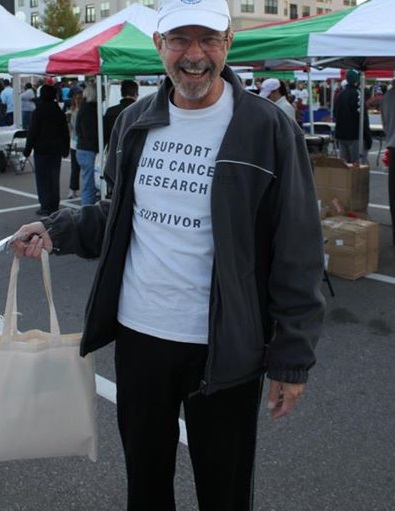 ?On February 7, 2006, I was diagnosed with lung cancer. I was 52 years old.  Those are some scary words to hear from your doctor – “you have lung cancer” – particularly when you had no symptoms that might have indicated there was any issue.  My cancer was found when I requested a chest x-ray during a routine physical.  On March 1, 2006, I had surgery to remove the upper lobe of my left lung and then completed four rounds of chemotherapy from May to July.

Removal of the tumor and chemotherapy were just the first steps in dealing with my lung cancer.  The resulting physical and emotional toll that cancer produces requires further life style changes in order to cope.  I decided to start running as a way to address both of these issues. At first it was just walking to the mailbox and back and then a little more each day until I did my first ¼ mile “run” on a treadmill in September of 2006.  I haven’t quit running since then.  On November 14, 2010, I ran the OBX Marathon at the Outer Banks of North Carolina and in October of this year I will be running a half marathon in the desert hills of Nevada.

I am a very fortunate lung cancer survivor in that my cancer was found at an early stage.  Often lung cancer is not discovered until it is in an advanced stage and treatment options are limited.  I’m proof that lung cancer doesn’t have to be a death sentence.  With earlier detection and proper treatment, survivors can lead a “new normal” life - and even run a marathon!  If you see me out running, stop me and say “hi” - I’ll be wearing the “Support Lung Cancer Research” t-shirt.    :)
- Jerry Walton
More Stories of Hope & Action