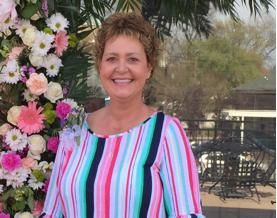 My lung cancer story began in August 2016.  While at work, I began having intense neck and shoulder pain. The pain began radiating to my chest, so I went to the emergency room. Nothing was wrong with my heart. As part of the workup they did a chest xray and saw a small spot in my left lower lobe. Because of my age, 47, and non-smoking history, they followed protocol and asked me to come back in 6 months for a repeat chest xray. I wasn't comfortable with that as I felt I would worry while I waited 6 months. I pushed for a CT scan and that is when they discovered a tumor in the right upper lobe of my lung. The spot in my left lower lobe was a lipoma, which is benign in nature. Hiding in my right upper lobe, behind my breast bone was the tumor. It was not visible on xray, but was found by CT scan. This was my first lesson in self advocacy.

I have been battling stage 4 lung cancer for over 2 years now. It has been a journey of ups and downs. I am going on my 4th line of treatment as my cancer continues to mutate beyond my therapy. I am constantly waiting for the other shoe to drop and it is my fear that one day they will say, "there is nothing more we can do." Lung cancer has hit my immediate family very hard. Seven months after my diagnosis, my dad was diagnosed and chose not to fight. He passed on 6/2/17. Because of the cancer in both me and my dad, my 2 sisters went to be scanned.  It took some convincing to get the doctors and insurance on board, but they were both granted scans. Fortunately my youngest sister's scan was clean. However, my middle sister was also diagnosed with lung cancer. She had 2 spots removed from her right upper lobe and was diagnosed as stage 1 and likely cured.

Lung cancer is devastating and wreaks havoc on all areas of life. Anyone with lungs can get lung cancer. Many young, non-smoking women are being diagnosed. We need to push hard for more research and development of medications to cure this deadly form of cancer that kills 433 people a day in the US and does not discriminate between race, gender or smoking history.