Nancy's Story
On her Husband 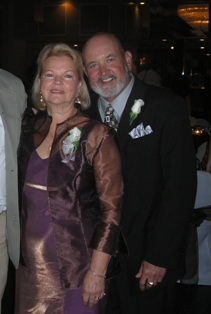 I am a lung cancer survivor! No, I didn’t carry the cancer in my lungs but I watched the man I loved slowly fade away from this malicious decease.  My husband of 30 years, Thom Wood, was the most active, healthy, and full-of-life person you could ever meet.

Thom was retired and worked part-time at Keith Hills Golf Club in Buies Creek, NC. Golf was his main hobby (riding a Harley was his other). While playing in 2007 he felt something pull in his ribcage. For weeks he thought it was just a muscle. When it continued to worsen, he finally saw a doctor.  They called him on 9/21/07 to say that his x-ray showed a large tumor in his right lung. After many tests, we learned he had stage-4 metastasis lung cancer and there was nothing they could do but give him palliative care. We couldn’t believe this was happening to our family.

As we progressed with chemo and radiation, it became clear that there was a deficit in medical treatments for lung cancer. Thom used to say “Yes, I smoked but I don’t deserve to die because of a bad habit.” Other people eat unhealthily or have other bad habits that cause severe illness, but they aren’t looked down on like people with lung cancer.

Even though he was so frustrated with the lack of research and options, his attitude was unbelievable. The doctors and nurses he met loved him; he would tease them and make them laugh and they’d schedule his appointments so they could be there. He insisted we do all the planning necessary for his death- services, a cemetery plot, casket, etc., and yes, he dragged me through the process.  But even the folks at the funeral home laughed with Thom. He said he didn’t want people to remember him as sad and morbid.
His spirituality grew- Thom believed in God but didn’t have a personal relationship until his illness. We read devotionals every morning and prayed together often. As Thom was getting weaker, he relied more on my strength and during those 10 months, our love grew even stronger.
After his death on 8/8/08, Keith Hills Golf Club asked me if I was interested in participating in a tournament to honor Thom and raise money for lung cancer research. On 5/9/09, we held the first Thom Wood Memorial Golf Tournament. The rest is history, and we’ve had it every year since. I’m sure Thom is in heaven laughing at the thought of me working on a golf tournament, as I knew nothing about the game.
This story is shared by many others who have walked this path or are currently living it. Thanks to all of you who help raise awareness and search for a cure for lung cancer. I will continue the fight!
- Nancy
More Stories of Hope & Action