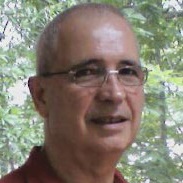 Saying Steve Shakal has been through a lot would be an understatement. Initially misdiagnosed, later tests revealed not one, but three growths: a 10 cm tumor on his right lung, that had spread to his second and third ribs, a tumor on his vocal chords, and another tumor/lesion, about four cm in diameter, in his head pressing against the upper left temporal lobe of his brain. His cancer was stage IV, the worst possible prognosis.

Less than three months later, he underwent another surgery, expecting only a 40% chance of survival.The doctors had to remove a third of his right lung, three ribs, lymph nodes, and some of the chest wall and muscles. Shakal left the hospital four days later.

Now, Shakal makes the most of his experience by volunteering with the Lung Cancer Initiative of NC, the Rex Cancer Center, C.P.O., and at the Cary, NC office of the Cancer Centers of North Carolina, where he helps prepare infusion supplies and brightens the day of those who are going through treatments.