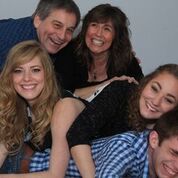 Health and prevention have always been an important part of my life. Breast cancer runs in my family; all were diagnosed in their early thirties and died well before their 50th birthday. As a precautionary measure my doctor recommended mammograms starting in my mid 20’s. I tried to make healthy choices, but every year I was stressed out after having my mammogram, until I got the all clear. Yep, these healthy lifestyles and tests had this cancer thing under close watch for a 55-year-old!

Worn down readying for the holidays, my sinus infection seemingly turned into a chest cold. Days before Christmas 2016, I headed to the doctor who heard fluid in my lungs which indicated pneumonia. The chest x-ray showed extensive fluid plus an ominous shadow. Dutifully, I took the antibiotics, returning as requested for follow-up the first of 2017. The next few weeks is a blur of tests. With my family history, I assumed I did have the #1 cancer killer. The lung biopsy showed it was lung cancer. My surprise is two-fold; lung cancer is the #1 deadliest cancer killer, and I had it! No crazy movie dramatic symptoms coughing up blood, losing weight or mysterious illness. Staggering shock rocked my world. We breathed prayers.

The extent of cancer has spread through your body is referred to as a stage. In four stages, a lower number has options and better life expectancy. With stage 3 lung cancer, average life expectancy was 5 years with treatment. Several months with chemo treatments later, until my youngest graduated from college, I had an entire lobe of my lung removed, and kept breathing and praying.

Just breathing presented a new challenge with less lung and chemo exhaustion. On a dream vacation to Disney, it became necessary to use a scooter to get around. I was humbled and often felt humiliated. To look at me, I appeared normal. I have shopped, hiked, worked out, walked all with the intention of building my stamina. I am not fast, and humidity or heat can steal my breath and flatten me.  It is not a pretty sight, but I can and do get where I am going.

So in a challenge for my breath, I am in my first ever 5k.

Both excited and nervous to do a 5k with the Lung Cancer Initiative, I will participate to my best ability on behalf of the many victims of lung cancer in hopes to raise funding for more to survive. Initially, I just wanted to be a survivor.  By surviving the lung cancer battle, learning the truths of the disease, advocacy has chosen me. It is because I am a blessed exception that I have to speak up to help the many that cannot speak for themselves.

My first 5k adventure has me breathing and walking; no oxygen, or wheelchair, and still less lung than other people.  Will you genuinely breathe life in sponsoring?

On March 30, 2019 I will be in the LUNGe Forward 5k at McAlpine Park to fight this evil killer that takes more women’s lives than any other cancer. I have been gloriously blessed with what is the goal of every cancer patient, to be cancer free, today. My ‘no evidence of disease’ is a direct result of research money and molecular testing well spent.  How many lives in our community will you help save?