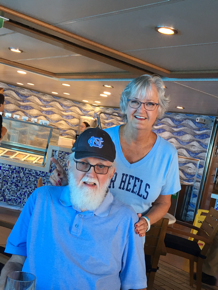 In November of 2006, I was diagnosed with Stage 3B non small cell lung cancer.  I was stunned… I had no symptoms except for a small lump in my neck which turned out to be a cancerous lymph node… and the journey began.  Thank goodness for a primary care doctor who didn’t ignore that node… and thank goodness for living in an area of North Carolina with superb lung cancer specialists.  Twelve years ago there was no such thing a lung cancer screening or molecular testing for mutations.  After shopping for treatment, I participated in an aggressive clinical trial at the University of North Carolina… chemo, radiation, and a targeted oral therapy drug.  Nine months long… was it easy?... No.  Was it worth it?  In my case, Yes.  I was in remission for 3 years… and in that time, I found out I had a mutation called EGFR… that targeted therapy drug I had had in my first round of treatment was the first drug developed for EGFR (I think).  So I had some more chemo and radiation due to a met to the brain. My final treatment was a craniotomy to remove what turned out at scar tissue from the radiation to the brain.

Twelve years later… I’m doing well… I retired after working 42 years in education as a speech-language pathologist.  All this has led me to become a volunteer patient lay navigator at UNC’s cancer hospital in the thoracic oncology clinic.  I learn more and more about lung cancer and all the new drugs and treatments available to lung cancer patients.  I am involved in the Lung Cancer Initiative of North Carolina because it provides statewide support to lung cancer patients.  Researchers are making progress in lung cancer treatment but we are horribly underfunded… Women getting lung cancer is also a frightening trend.  Yes, I’m lucky but hope to pass this luck on to other patients, especially women.